Assuming your son or daughter has a cell phone, do they text? 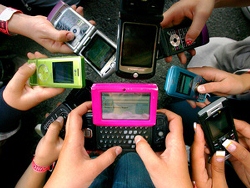 The Pew Research group recently concluded that most teens prefer texting to talking – with a third of them sending over 100 messages a day.

Tolerance for this type of behavior varies by family, of course, but almost no parent would knowingly permit their son or daughter to text crude, lewd or obscene messages.

But what about more vague or coded communications?

It takes a deft and alert parent to stay up to date on texting lingo, especially since the lexicon is constantly expanding and often doesn’t make any logical sense. For example, if your child happens to text “420” to a friend, you better be prepared for a serious talk.  That’s because texting “420” is the equivalent of asking if the other person has pot – or wants to get high. Apparently “420” is a universal symbol for the use and appreciation of marijuana.

Online tech dictionaries can help get you up to speed (click here), but the proliferation of coded sexual texting is enough to make your head spin. The following is a bit graphic, but if you?re a parent, this is something you need to be aware of.  For example, did you know that ?1174? is a declaration that you?re part of the so-called ?Nude Club? ? or that texting the number ?8? is a request for oral sex? ?GYPO? means ?Get your pants off? and ?LMIRL? is the abbreviated way of saying, ?Let?s meet in real life,? which can be innocent, but not if your 12-year-old daughter receives such a message from a 17-year-old young man.

And don?t forget that many of today?s kids are savvy when it comes to evading parental monitoring efforts. Case in point: ?P911? translates to a ?Parent Alert? and ?POS? is a way for a child to alert his texting friend that there?s a ?parent over [their] shoulder.?